Configure the settings of agents 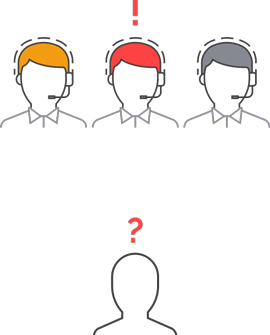 The agent rights on luminjo are:

Each agent has its own rights defined by the agent role. Verify actions of your agents and avoid silly errors on their part. For example, an agent who has more rights, such as removing an agent, may be led to inadvertently remove an agent. Be sure to choose the correct agent role.

Find out more about the agent roles

what does it mean to assign a conversation?

Sam, the manager, also has the right to put a conversation in a folder adapted to the skills of one of his agents. For example, Sam sorts the conversation to the folder named "Code" and assigns the same conversation to Brit, who is a developer.

For customer service on luminjo, agents have rights based on their role (administrator, agent, super agent). The administrator can control who has access to certain conversations and distribute them intelligently to his agents.

Here are the actions :

Take time to assign the rights to agents according to their responsibilities within your company.

On luminjo, an agent according to his role and his rights has the possibility to :

Take the time to set up agent rights on folders for optimized customer service.

Follow-up of the evolution of the problems of your customers and history of the actions of the conversations. The status of conversations will allow you to follow their evolution.

Save time by using automated responses to answer your customers' recurring questions. Write the answers you need and use often to communicate easier.

Your agents can leave internal comments on a conversation in order to communicate with each other. These comments will obviously not be visible to customers.